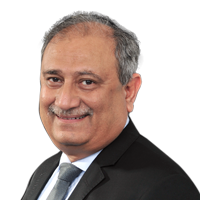 Mr. Sanjiv Paul, 55, started his career at the Steel Melting Shops where he worked in various capacities till 1998. He assumed the position of General Manager (Town Services) in January 2003 and under his leadership, the Town Services Division of Tata Steel became an independent company by the name of Jamshedpur Utilities & Services Company Limited, which he headed as Managing Director till March 2010. Mr. Paul was the Vice President (Corporate Services) of Tata Steel Limited from April 2010 till March 2013 after which he joined Tata Metaliks Limited as Managing Director. From July 2017, Mr. Paul has assumed the role of Vice President, Safety Health & Sustainability at Tata Steel Limited. He has been an active member of various trade bodies such as CII, FICCI & BCCI and has provided guidance as Chairman/Member of the Board of various organizations such as mJunction, JUSCO, Tata Metaliks, Tata Pigments, NIFFT etc.