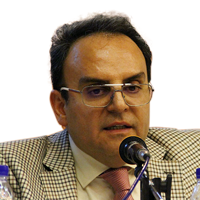 Mr. Tehrani has a Bachelor of Electronic Engineering, Master of Medical Engineering and PhD. of Radiology from Iranian Reputable Government Universities and some more post-graduation courses in Mining, Steel & Management Fields from Iranian & Foreign Universities. He is a Professor and an Analyst in International Economy and Management and has many published articles. He has 31 years of experience in the field of mining production & export of commodities. He is a Former Member of the Board & Head of International Affairs of IROPEX (Iron Ore Producers & Exporters Association of Iran). He has a record to have presentation and speech in more than 150 conferences, summits and congresses worldwide in the field of Iron Ore, Mining & Minerals, DRI & Pellet, Steel, Billet, Base Metals, Ferro Alloys and Trade/Export/Finance/Investment, since 2011. Recently he has also been appointed as “Professor of FMIT (Fundamentals of Minerals International Trading) Course” which has been held in “Tehran University”.

Topic:  Steel Technology in Iran and Effects of US Sanctions

Abstract: Crude Steel Production of Iran was21 Million & 884 Thousand Tons in last Persian Calendar Year corresponding to March 2017-March 2018. During the same period the Iran’s Crude Steel Output Capacity reached to 33 Million Tons. Iranian steelmakers aim to increase Crude Steel Output Capacity to 55 Million Tons per year by the deadline as per the targets set in the 20-Year Vision Plan (2005-25) named as “Steel Comprehensive Plan”. The plan was first floated in 2004 and integrated into the Fourth Five-Year Development Plan (2004-9) the following year. The plan was revised in 2007 under the title “Iran’s Industrial Development Strategy,” in which the total Crude Steel Output Capacity is expected to reach to 55 Million Tons. The Capacity Expansion, New Projects, Technologies and US Sanctions will directly affect the Iran’s Steel Vision 2025; however Iran is trying to use non-US and its allies’ substitute machinery and local made equipment as well as technology such as PERED to achieve the goal in Vision 2025.